Where to get married in Italy ? A week around the region of Puglia, in the south of Italy.

Puglia, the heel of italian paradise

This summer, I went on an adventure with a friend in the south-east of Italy, thanks to a crush on a gorgeous photo of a village on a cliff in Puglia.

This time, we decided to make a road trip, but on track : only moving by train. So we arrived full of hope in Bari to discover a city rather … below our expectations. The locals themselves say, Bari is not the dream destination.

Nevermind, we were there for heaven, so we went to get it!

The next day, we walked 30 minutes to the station, took a train to Lecce, an inland city that gave us access to the beaches of the East and West more easily.

Traveling by train in Italy is quite easy, there are several train companies all over Italy, only two in the south, like the motorway networks that we have in France. There is also a mobile application that has sometimes saved our lives because there was no terminal to buy tickets in some stations or staff that could sell it. Its name is Trenitalia, I advise you to take it if you go to Italy.

Two hours by train later, there we got Lecce, where we realize that our home is again a 30-minute walk (with bags). We were looking for a bus, a self service bike, anything that could save us time and effort on our stay, but nothing. Worse than that: the city looks completely dead, few people on the streets, a crazy heat, a blazing sun and we, who ask us where the hell we landed.

The house, it was rather cool, with two bedrooms, two bathrooms, a rooftop and a room upstairs containing only a chair and a carpet (why not). The manager was surprised that we did not have a car and even a little compassion for us I think.

That day, we wanted to eat at 2pm, because we arrived at that time. Everything was closed. Including supermarkets. Until 4-5pm. We still managed to find a small restaurant open but not so good, we will skip the name. At 5-6pm, here we are in the old town, a beautiful neighborhood of Lecce, when all of a sudden, the city is adorned with people in flesh and bone! We were not alone! Another Lecce appeared to us: an inhabited city, joyful, musical and lively. This is how we understood that the Italians (at least in the south) stop living the afternoon and come back to life at night! I knew it for Spain, I had never really experienced it, but here it was night and day! We were delighted! Animations, street performances, concerts, people chatting in the street (many, many people) because the Italians only like to chill in the street, standing, sitting, chatting, eating ice cream, without necessarily sit in a bar. 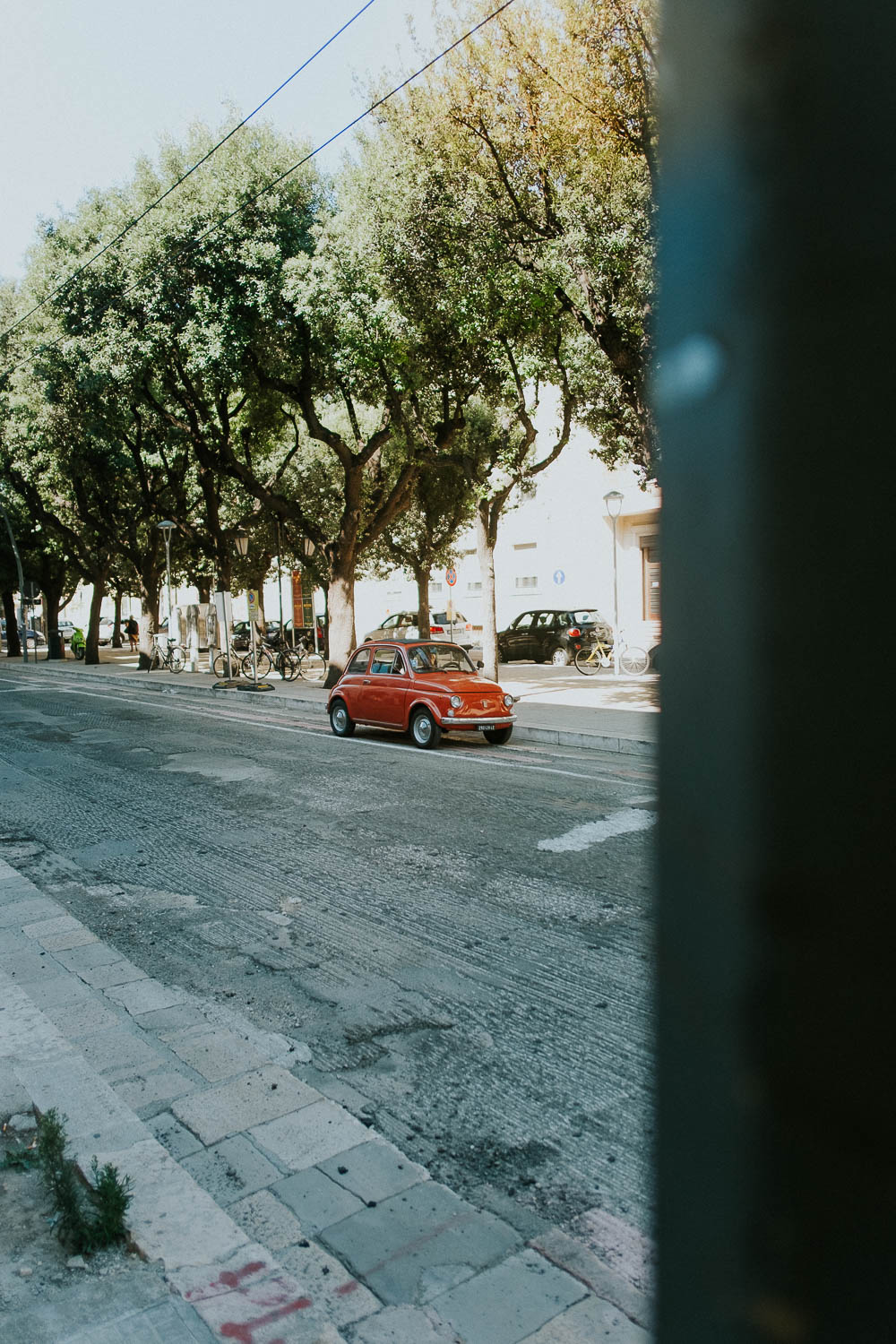 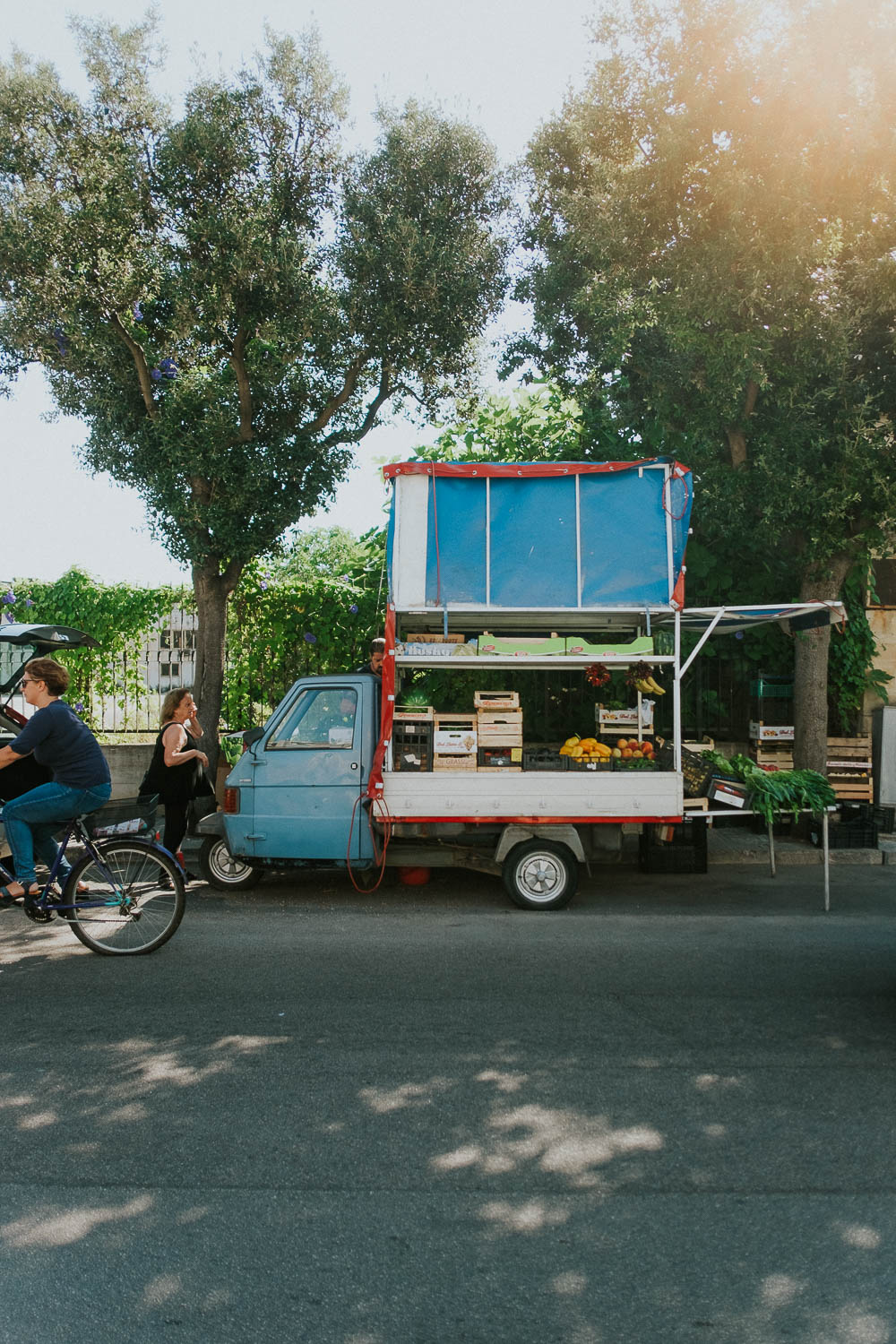 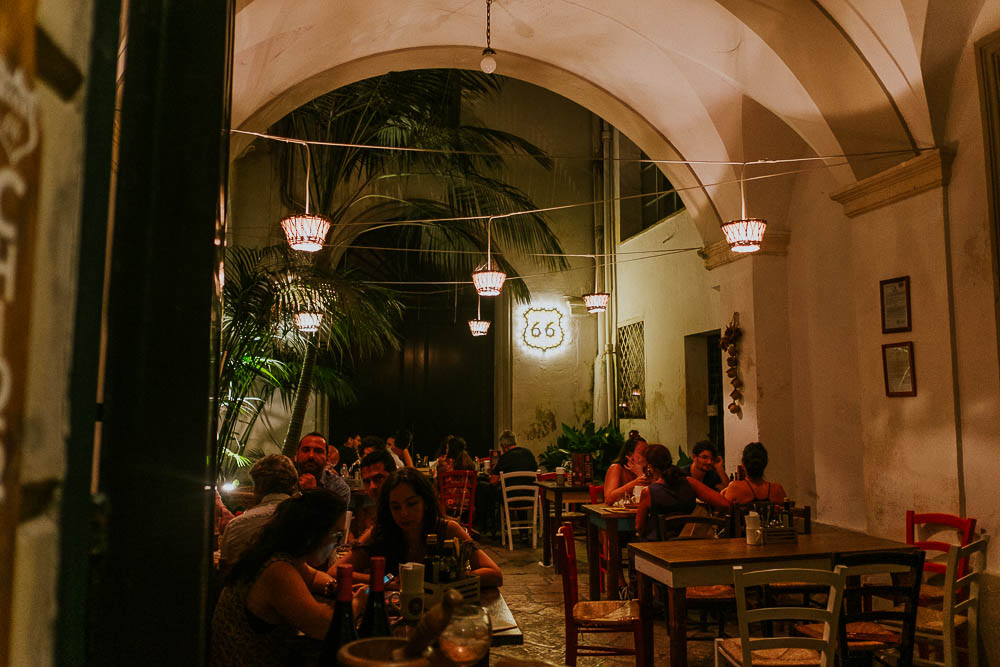 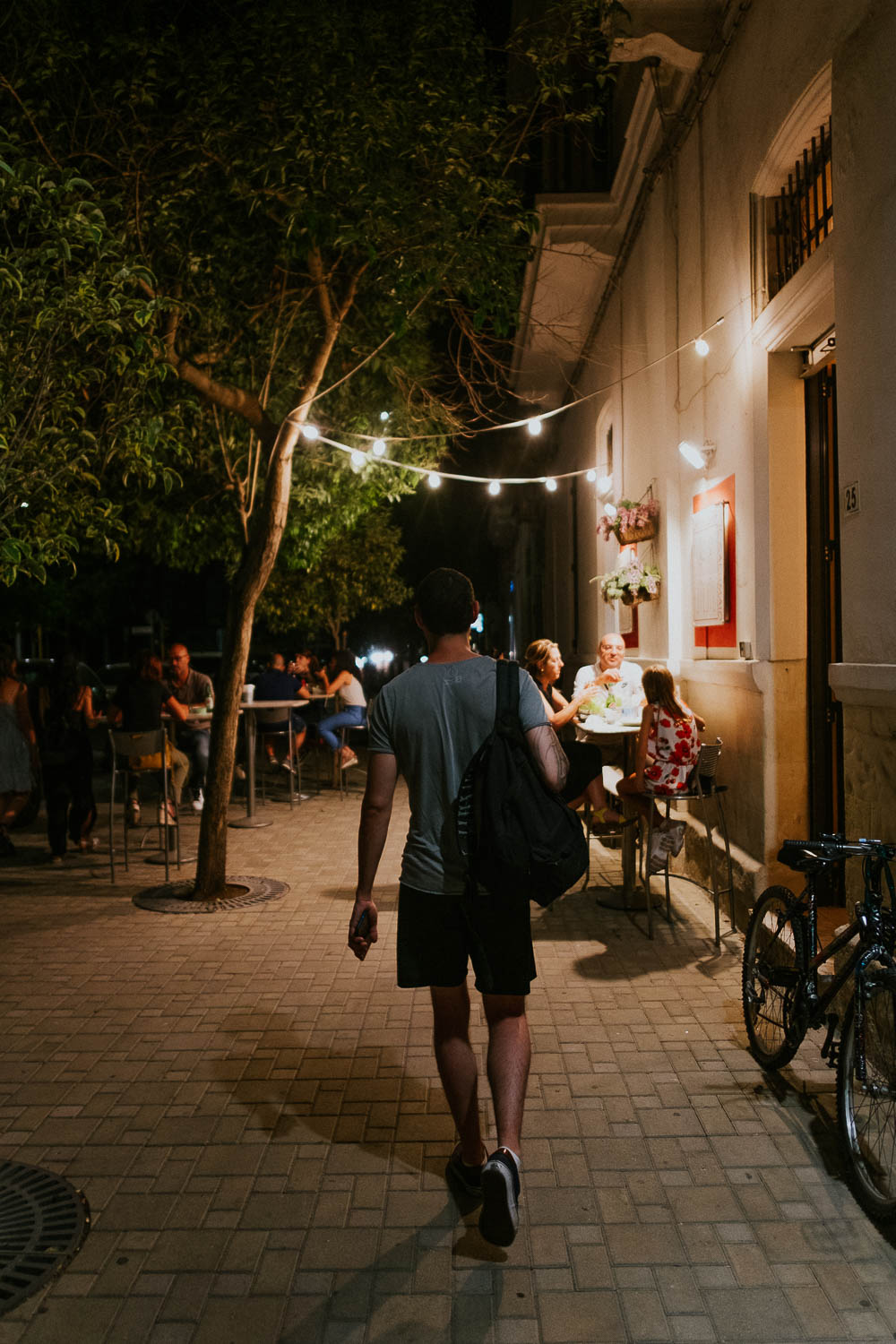 Head to the beaches of the East, in Otranto, where we leave by autobus with Trenitalia for 50 minutes.

This time, from Lecce, we tried to take a bus to go to the station, we found one we hailed because we had not found a bus stop, he dropped us near the station, but we were very lucky because we tried again later and no bus stopped!

Once at the station, we took a bus to Otranto.

We arrive at a lost train station, from which it is necessary to go down 15 minutes by foot to arrive in the city, with its city beaches: part parasol, part sand beach, and part marina.

Not too bad, it’s a beach town, nothing like heaven but it was hot, we did not complain!

Then we visited the old town of Otranto, with its small shops that sell local culinary specialties, soaps, jewels, etc., and Ape Calessino (rickshaw) to offer a little ride on three wheels.

In the evening, return to Lecce where we tested a very good restaurant outside the old town that makes all the dishes with and without gluten (pizzas, pasta, all that stuff), and is called La Pagghiara. 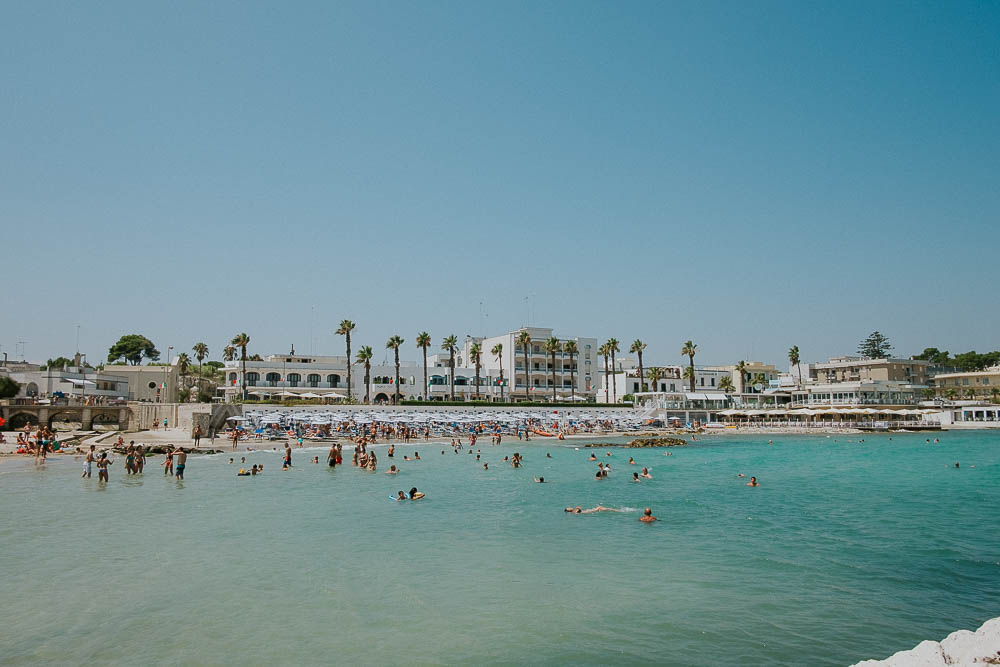 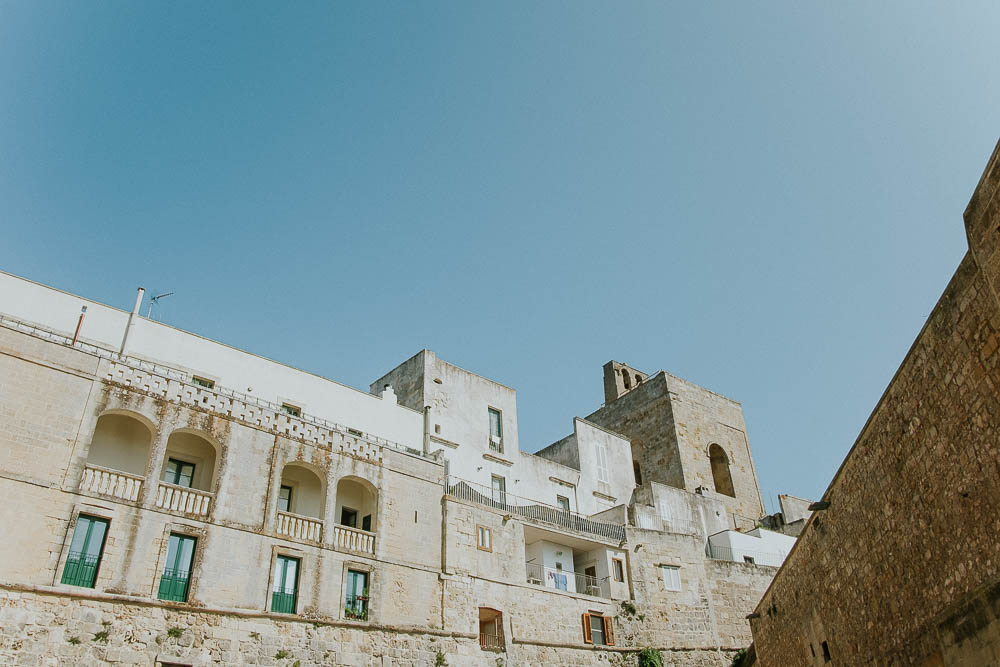 The next day, we headed to the sea in Gallipoli (1h30 by train).

We are finally at the sea, we immediately find a kind of dike made of concrete cubes where people bathe, without it being really a beach, rather an opportunity with water in it.

We jumped into the water right away. My friend borrowed a mask from a nice Italian guy to have a look underwater. The same Italian guy who had just sunk deep to show me the level of water and reassure me about what was underwater. He made us laugh. I think I made him laugh too by walking on my knees and groping on the rocks by fear of cutting my feet with a shell.

The old town of Gallipoli is as you could imagine Italy, with beautiful stone houses, windows and balconies with clean clothes flying in the wind, the bell of the church playing a sweet melody and the Italians who greet each other in the street in Italian (which I did not catch a word since I had done Spanish at school).

It is also both frustrating and magical to hear Italian without understanding, because even though I have not stopped taking out words in Spanish, I can hear Italian speakers and imagine what they are saying, with this singing accent where each sentence seems to be an interjection, it’s quite inspiring!

Then we wanted to go to Punta della Suina, an idyllic beach on Google images, which was actually a paradise of the deckchair and parasol. The beach was overcrowdy, few families, lots of italian young people with real beach bodies, and not much space for the wild side. We still enjoyed the sea at 28 degrees, with rocky soil covered with sand, so overall pleasant.

To return, no solution since no train goes there, we must walk again for 1:30, so we hitchhiked, and there an Italian couple took us directly to the house in Lecce!

In the evening, we still made a walk to town to enjoy the nightlife (the last bus is at 20:40). And we stayed at a super-good pub with a super cool staff, it’s called Doppiozero. Thumb up for the incredible parmegiana and for the fruity white wine I had the pleasure to taste Fiano di Avellino, local wine produced in Puglia. 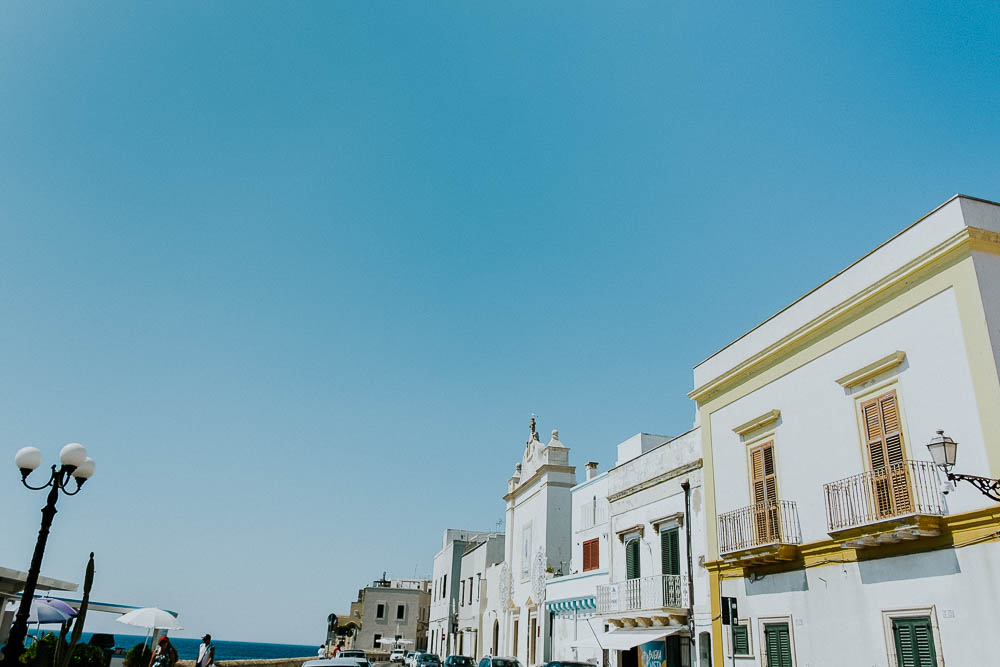 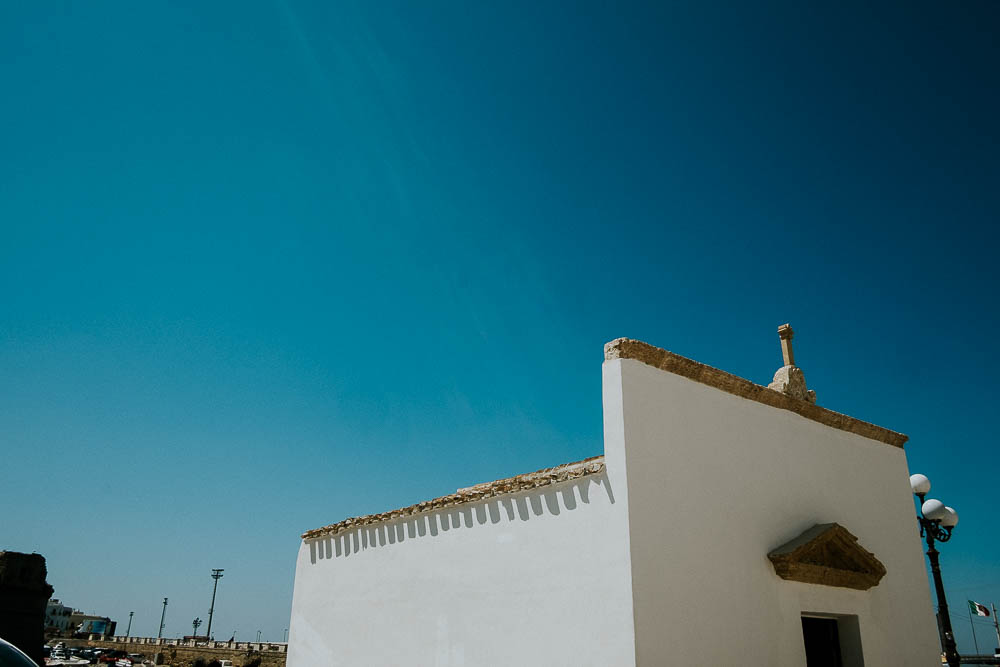 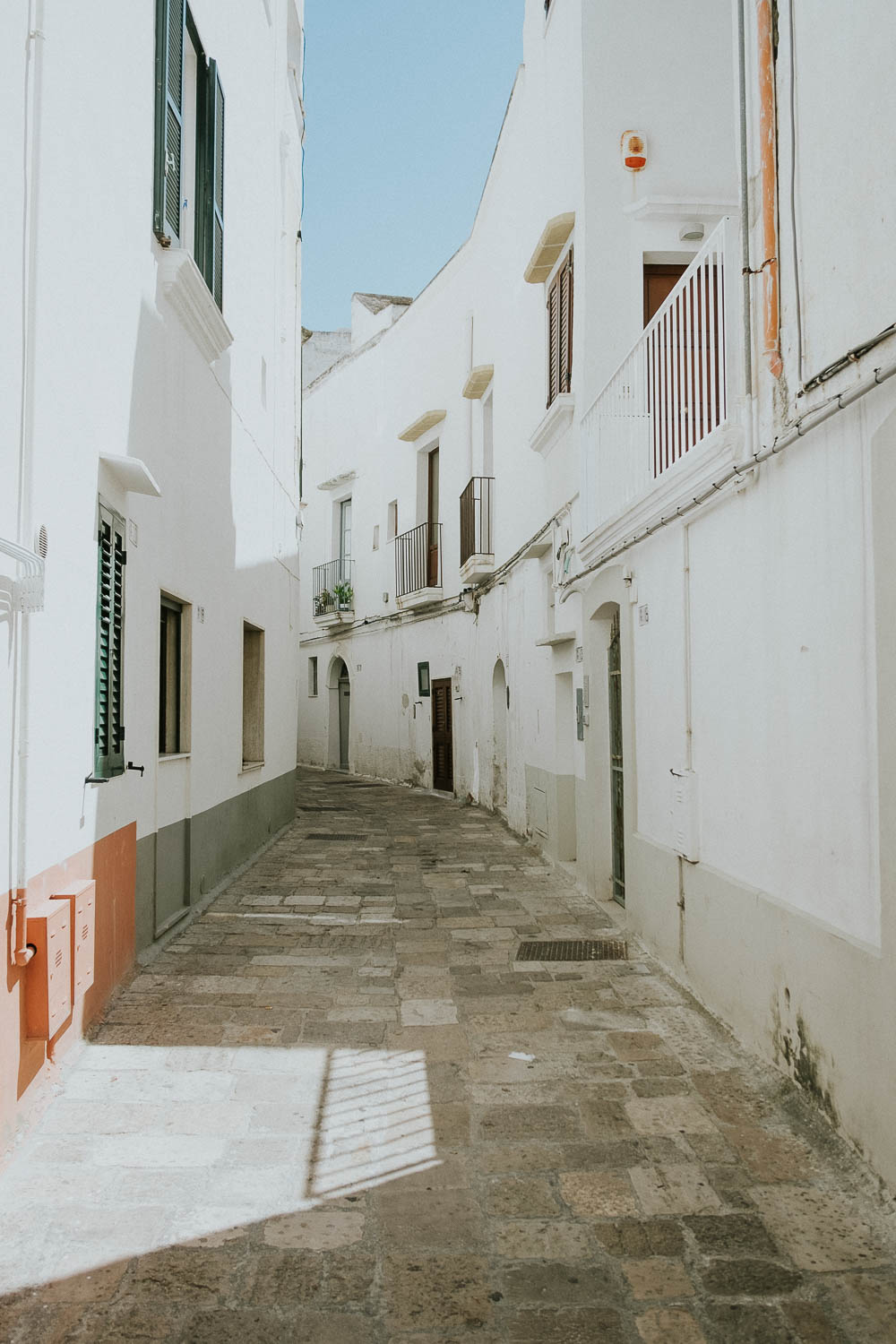 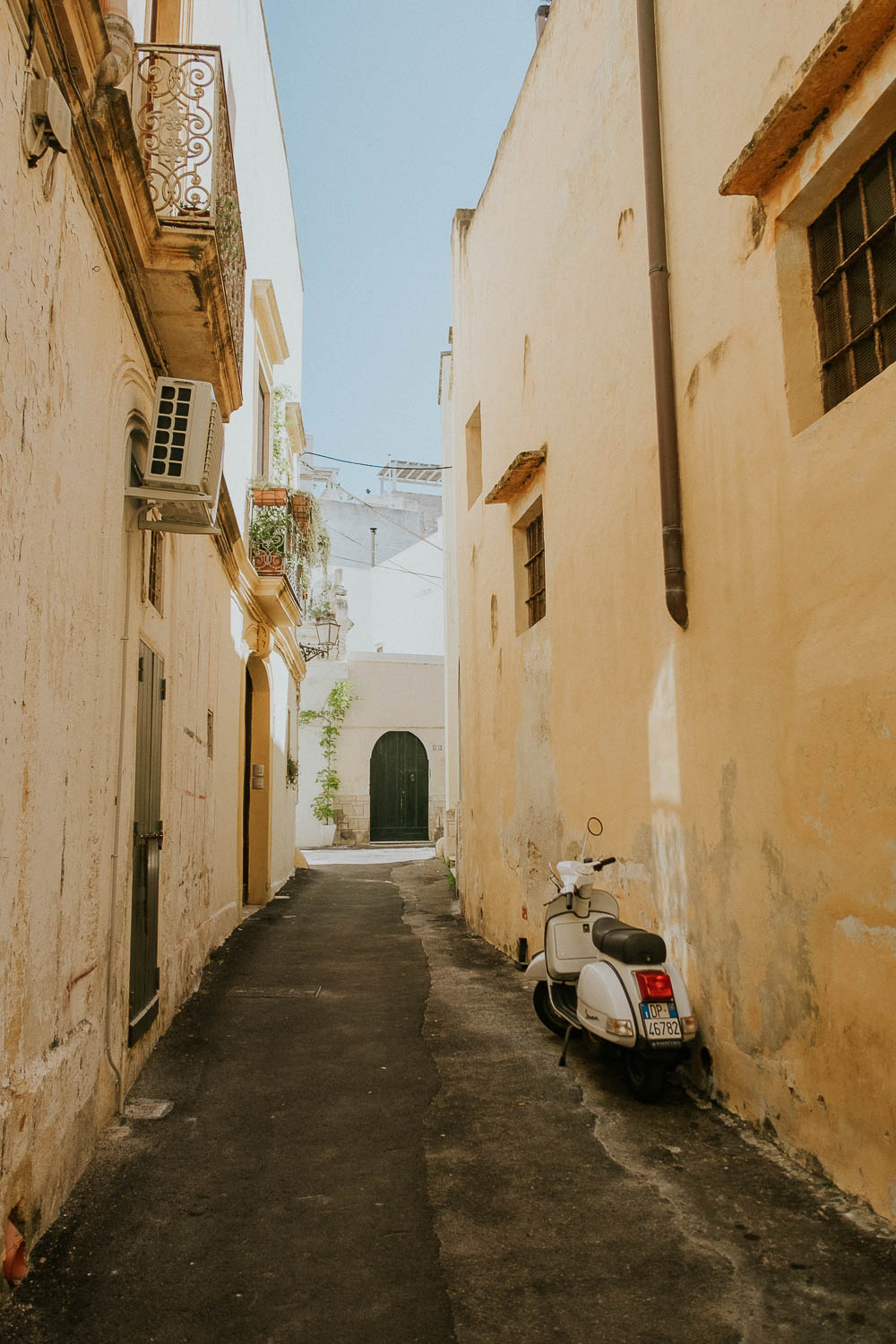 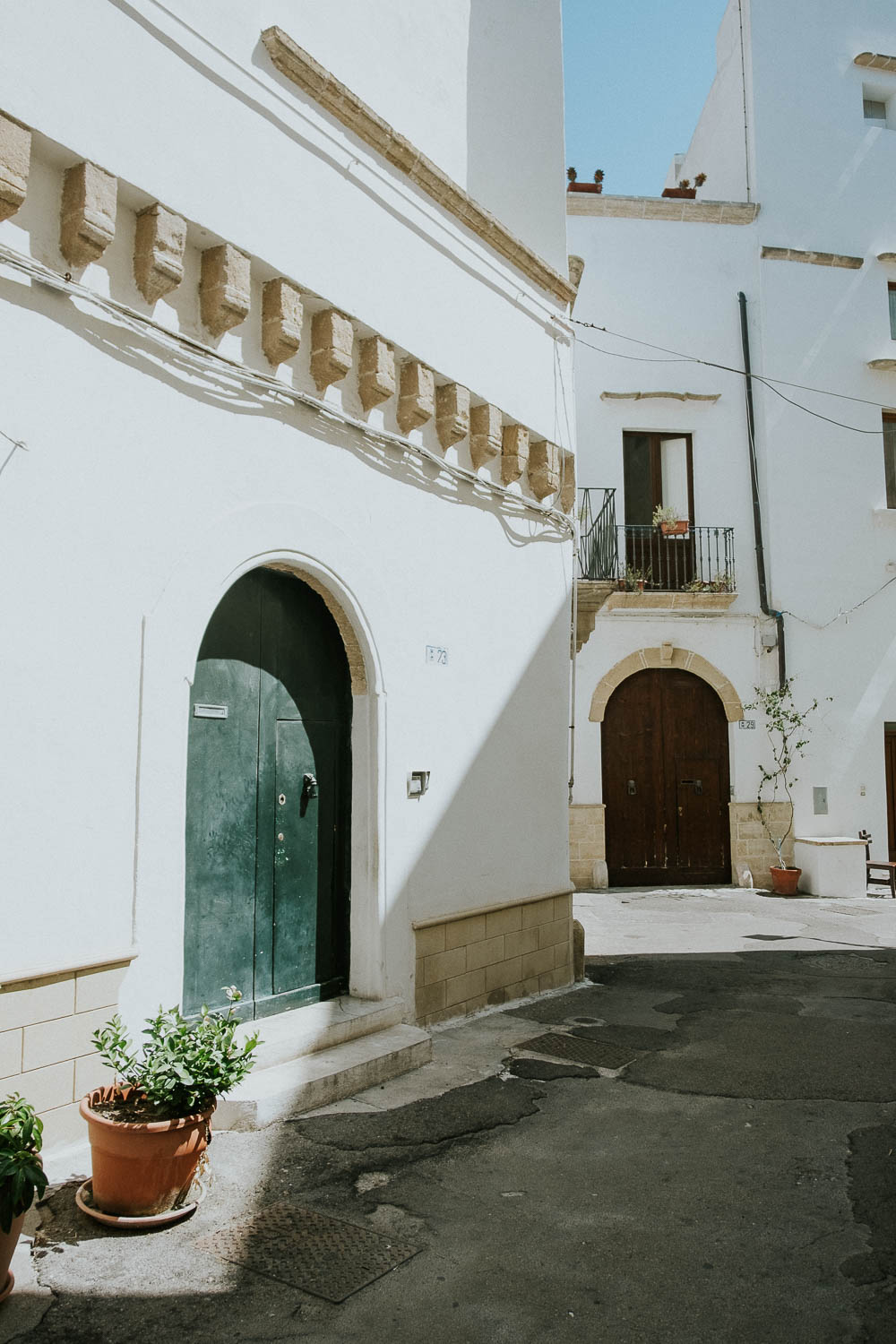 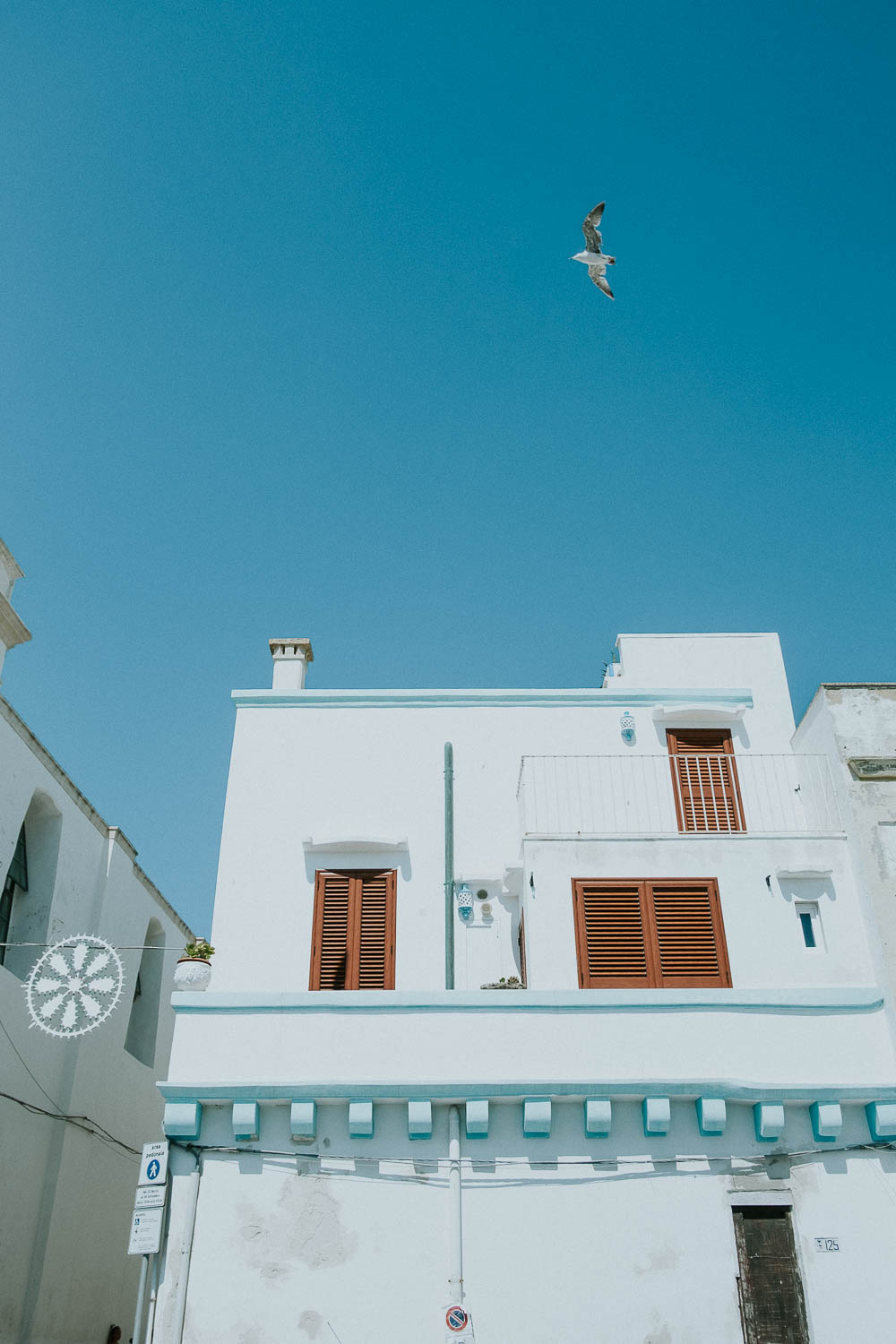 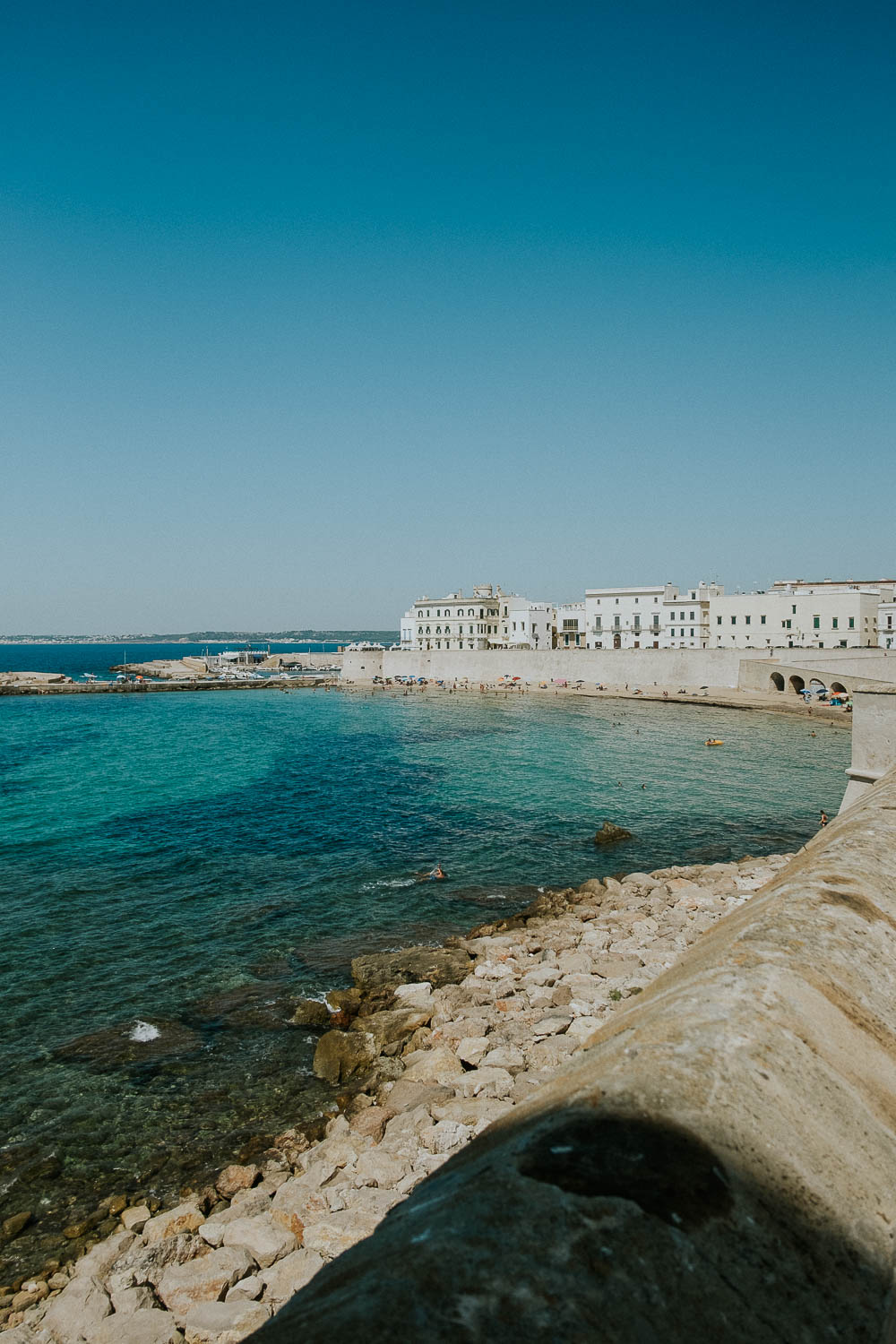 Then we decided to return to Bari to stay and visit two other cities: Monopoli and Alberobello.

So we did another 2 hours of train to join an Airbnb still far from the station but there are regional train stations closer (it works like the metro except it’s a train) and there are buses (and this time until 11pm). There, our host offers to take us to a kind of canteen in the city where you eat for 3 euros and the dishes are pretty good (too bad that my stomach does not support gluten). He takes us on a tour in Bari, passing through the old town and especially to the beach, which is called Pane e Pomodorro (literally, the beach is called Bread and Tomato!). True story ! 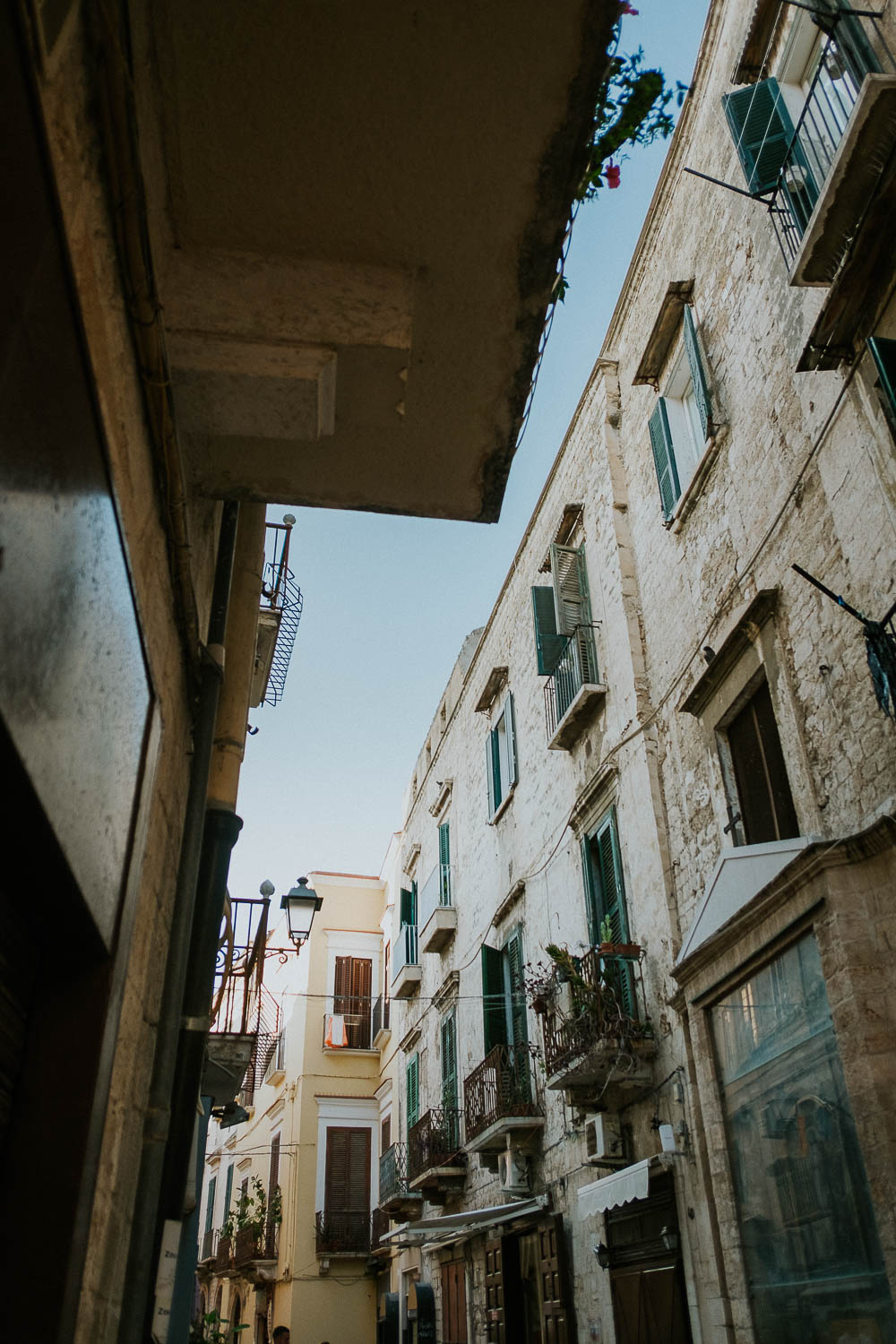 And we’re off again on our bus trip, 2 hours to go to Alberobello, a town made of typical houses called trullis, which are white houses with a stone roof. We had read on the blogs that they advised to go in the evening at sunset to avoid the shops, the crowd of tourists and the heat. We were right to listen to them because it’s also quite small so we quickly went around. It was not less beautiful! 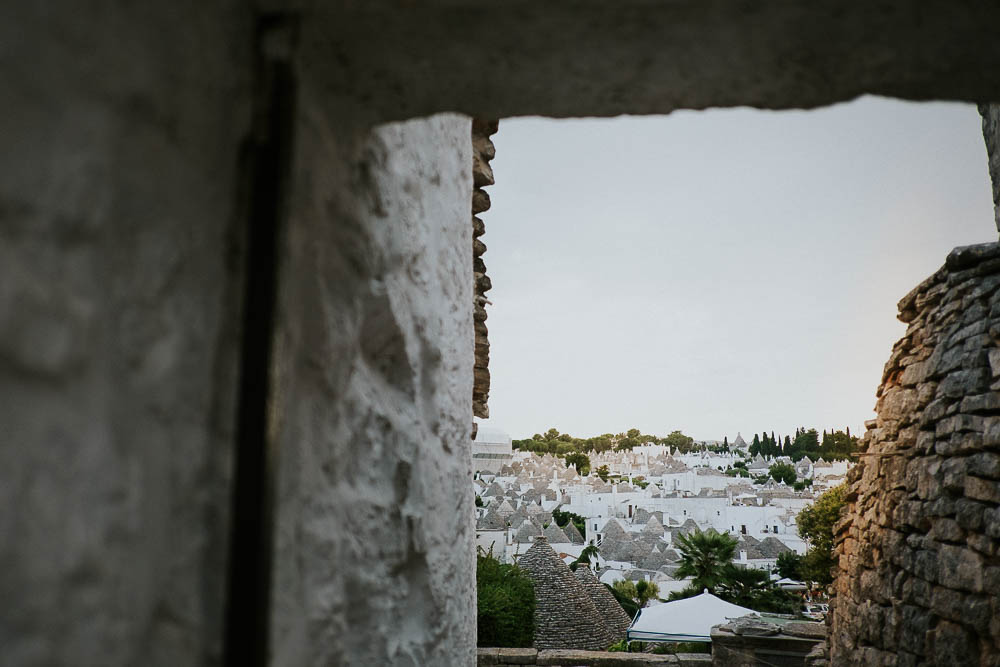 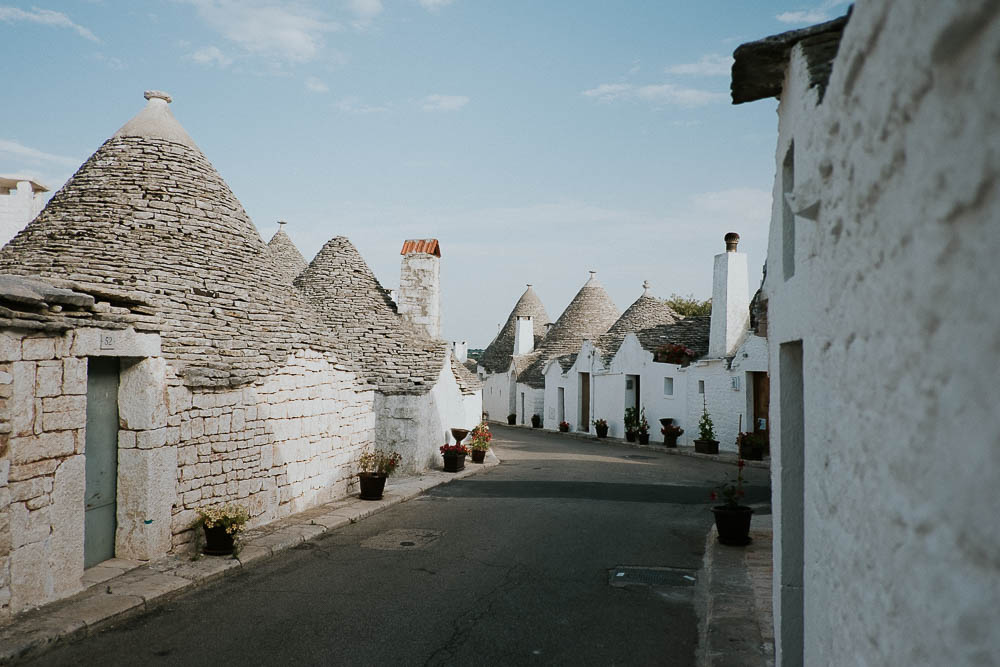 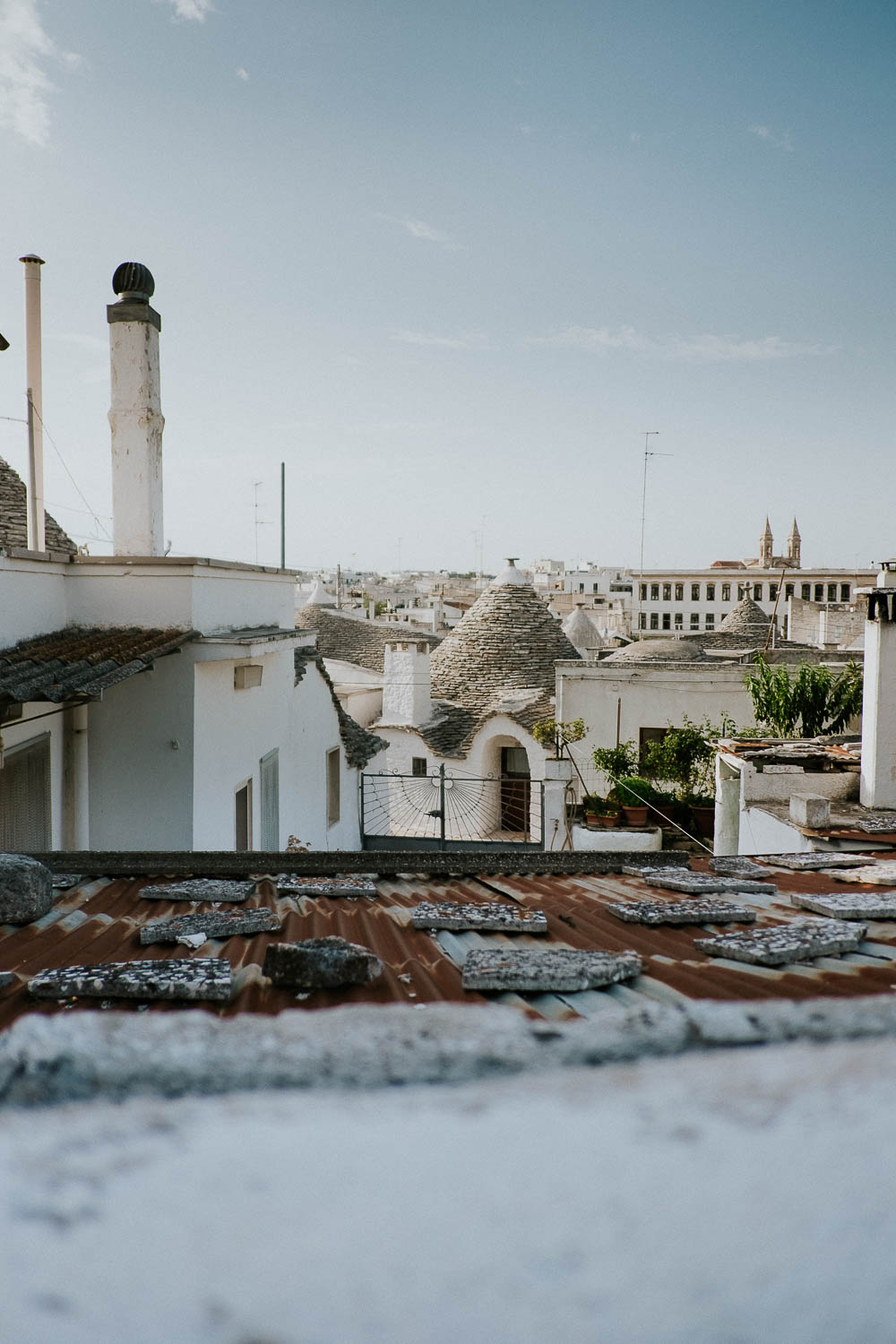 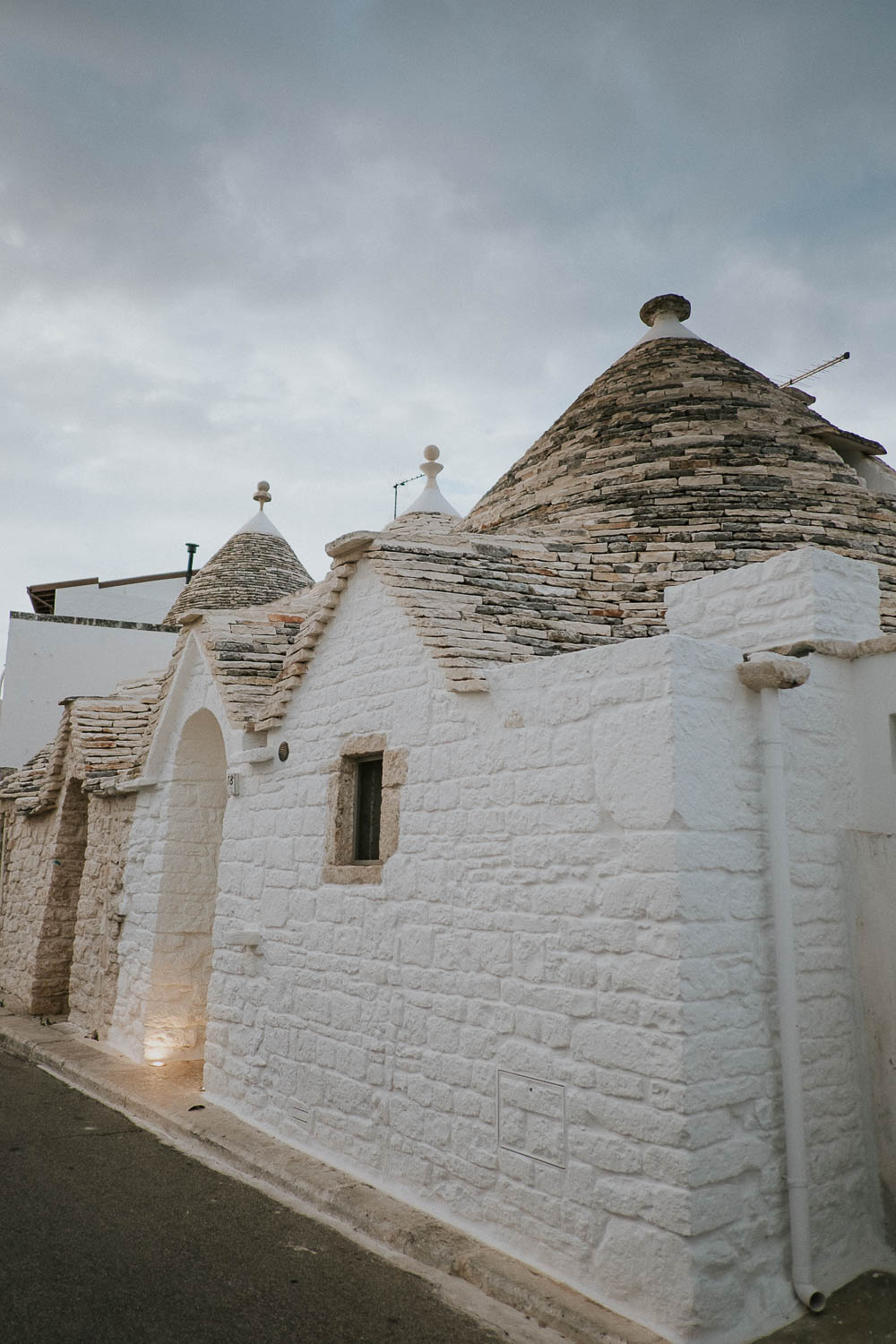 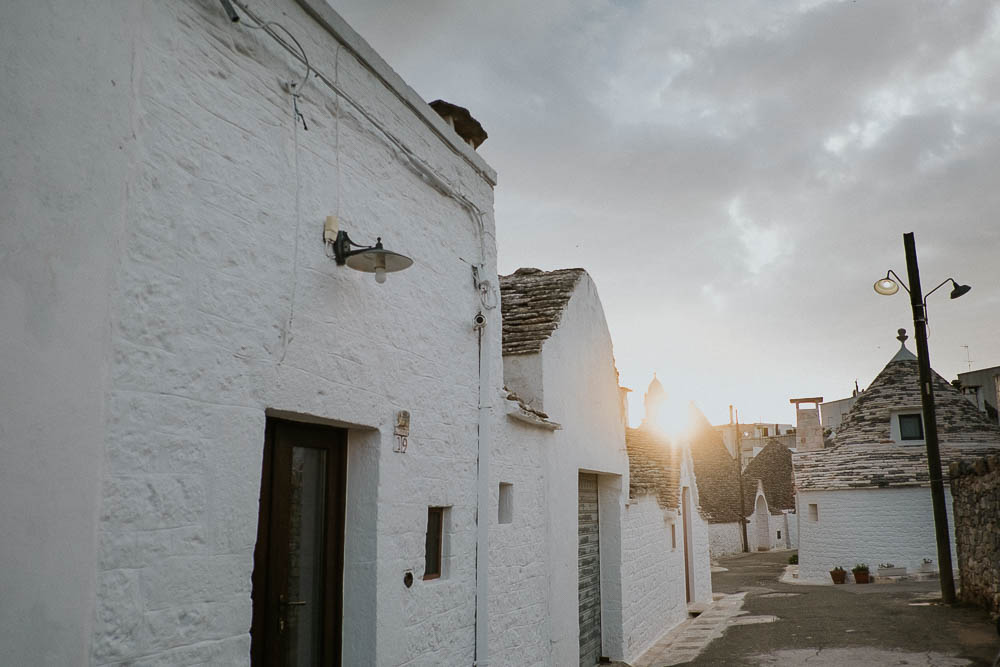 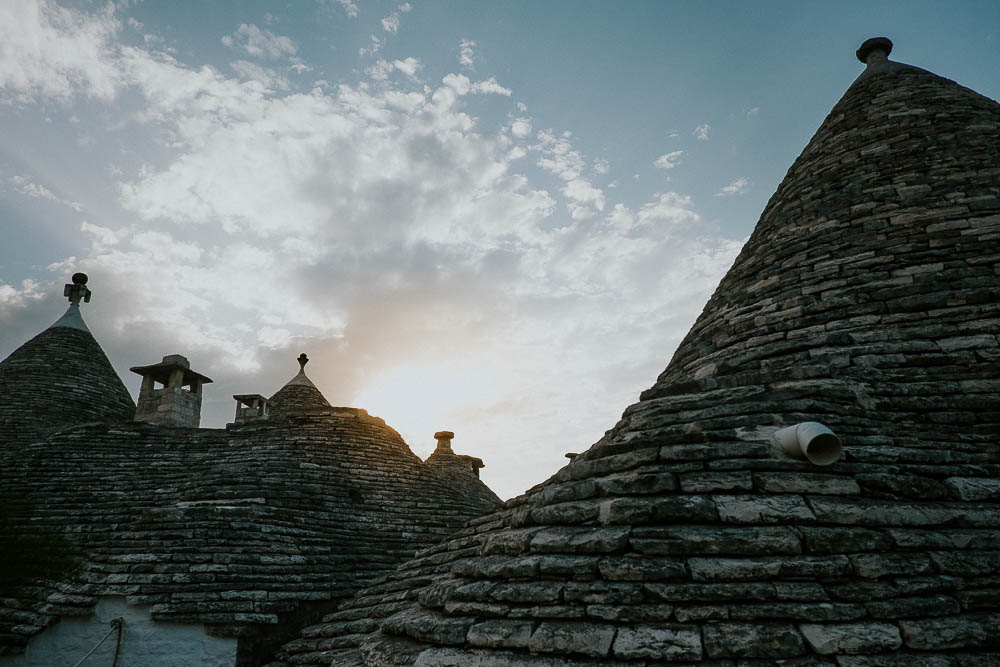 Crush of the trip! For once, not only the name of this city makes you want to buy 2-3 streets, but once you have a round in, you do not want to leave!

Here, it’s not just the old town that’s pretty! Colorful houses, sandy beaches but also rocky beaches (for all tastes), wild cliffs, and an old town with flying linen and the carillon of the church. In short, I buy!

If you ask where to get married in Italy, it is certainly in Monopoli that I will tell you to look.

We also wanted to enjoy the top of a cliff that was being eaten by the waves to improvise a natural jacuzzi (I discovered this concept in Australia, Champagne pools, where you sit into a hole in the rock waiting for the next wave that will make small bubbles like the jacuzzi). Fun experience but not to reproduce: my friend came out lacerated by the sharp rocks because of a pretty big wave that we took a little too hard! 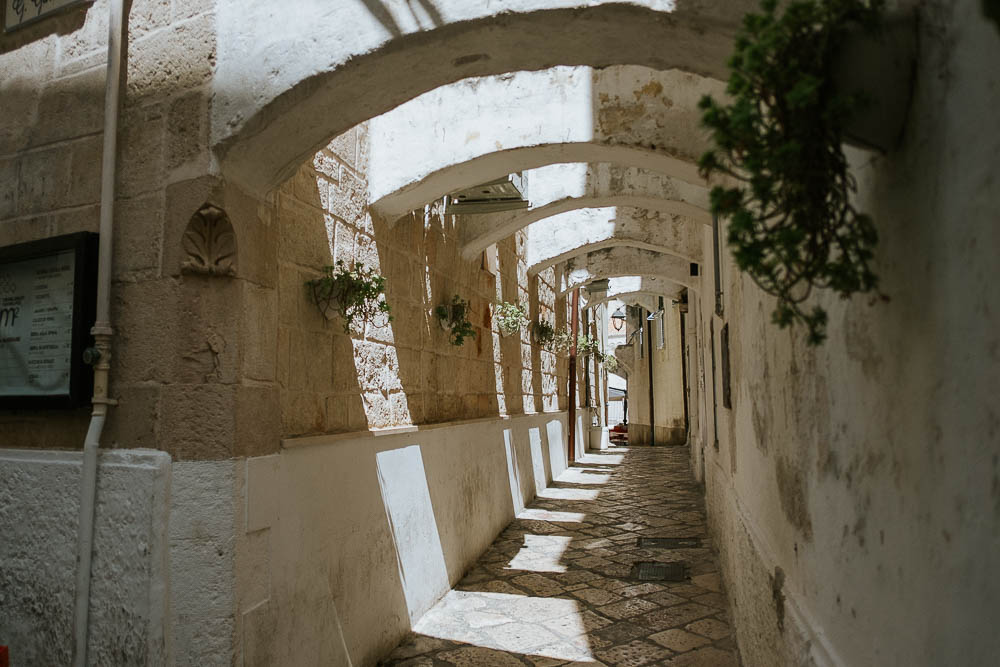 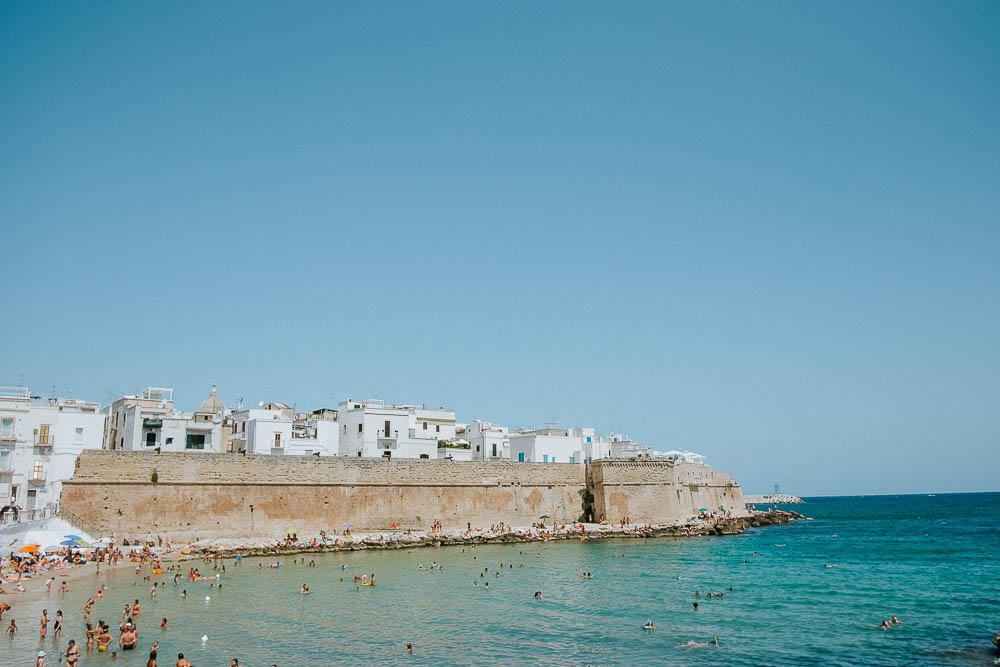 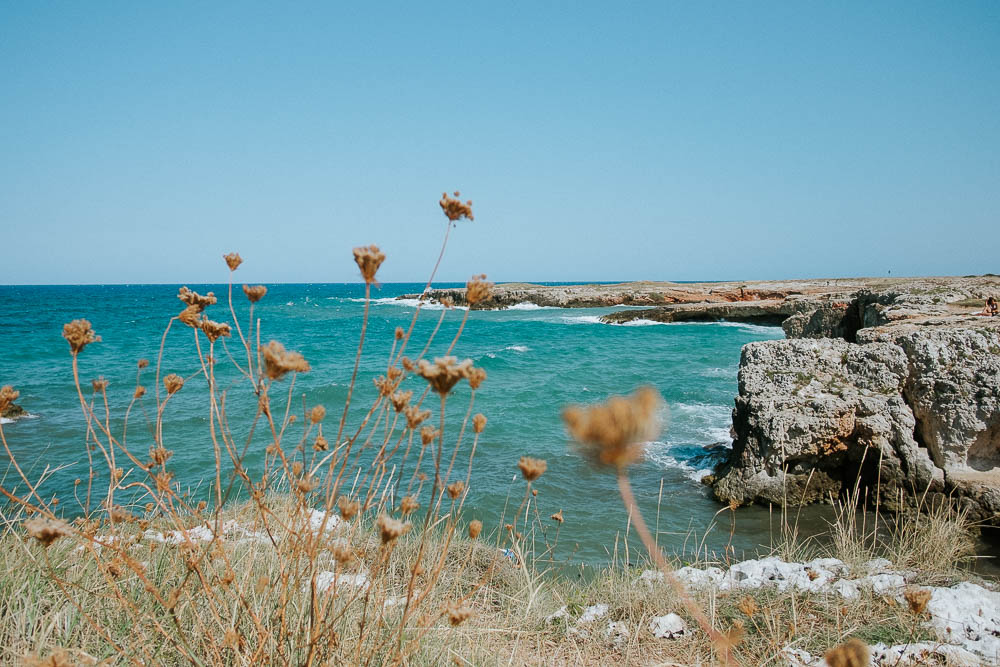 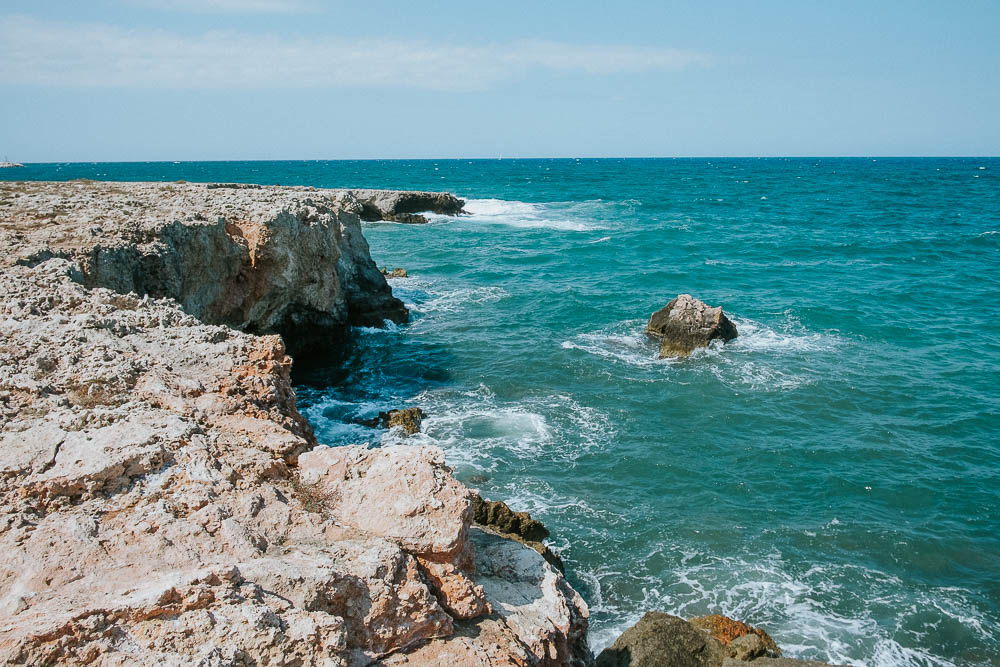 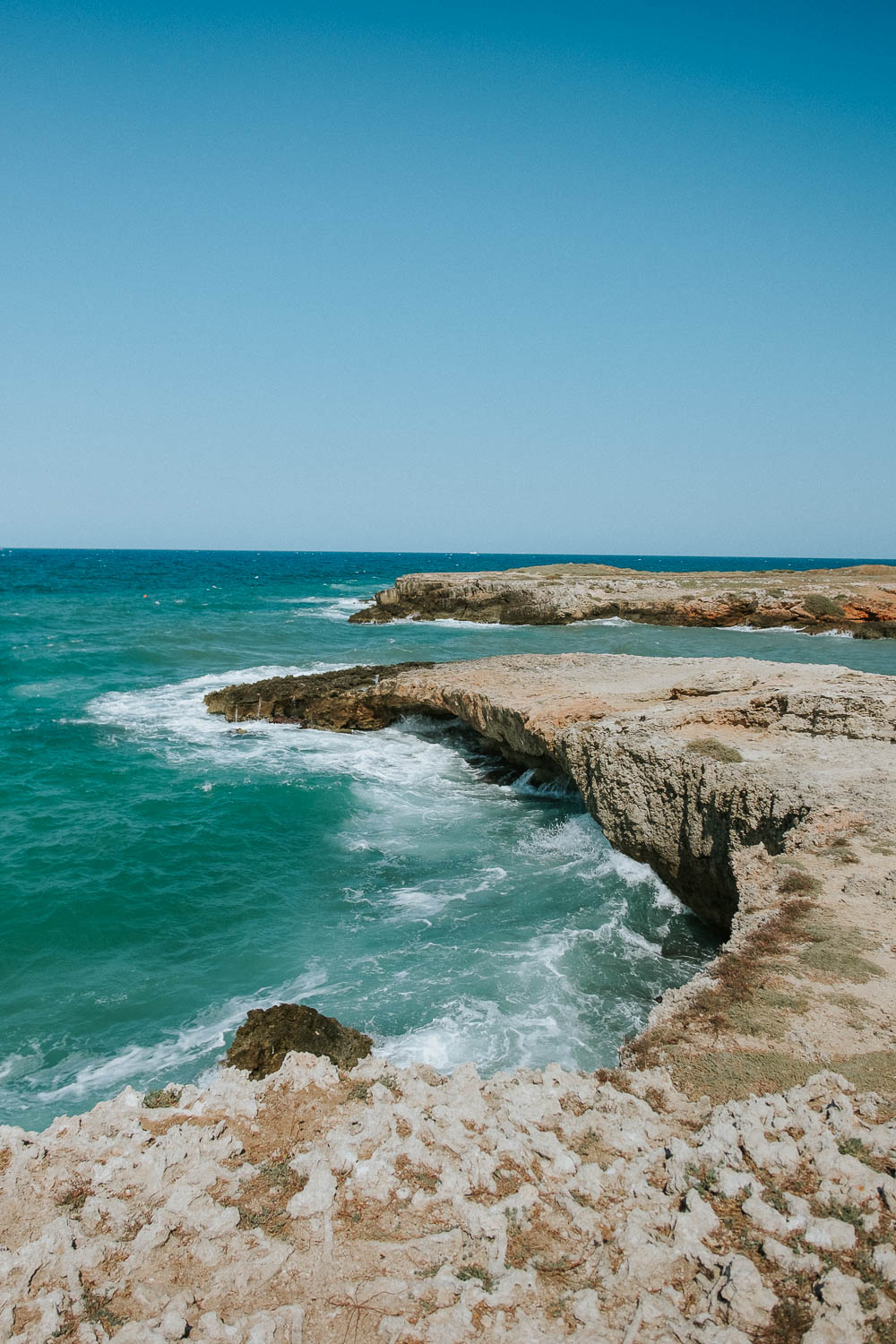 Finally, back to Bari where I spent my last day, heading to the famous beach Bread and Tomato!

It was Sunday and Sunday in Bari means everything is closed except the resto-bars by the beach on the esplanade. We also found one original named Pescobar, a fish burger bar and other seafood snacks, pretty cool too. 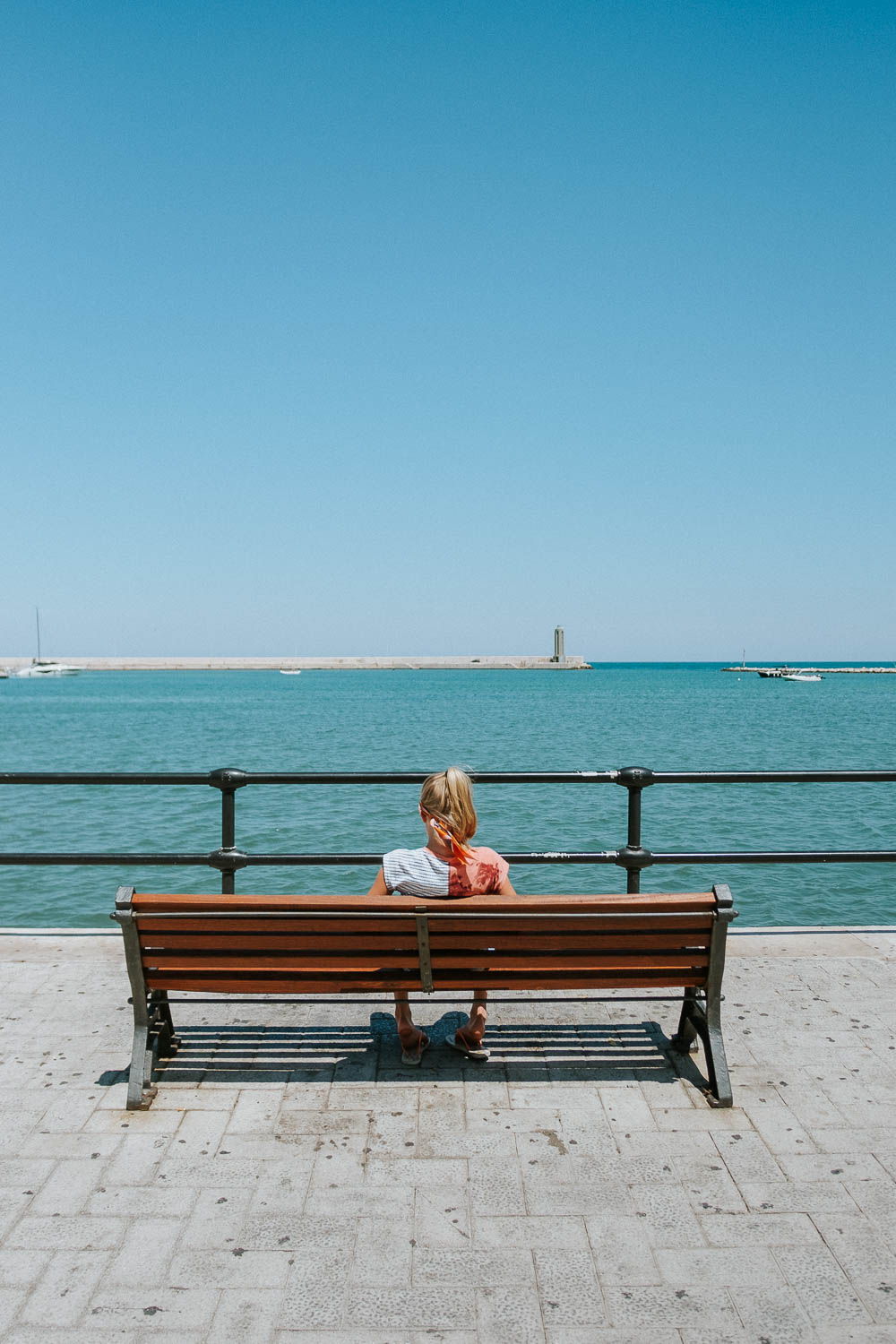 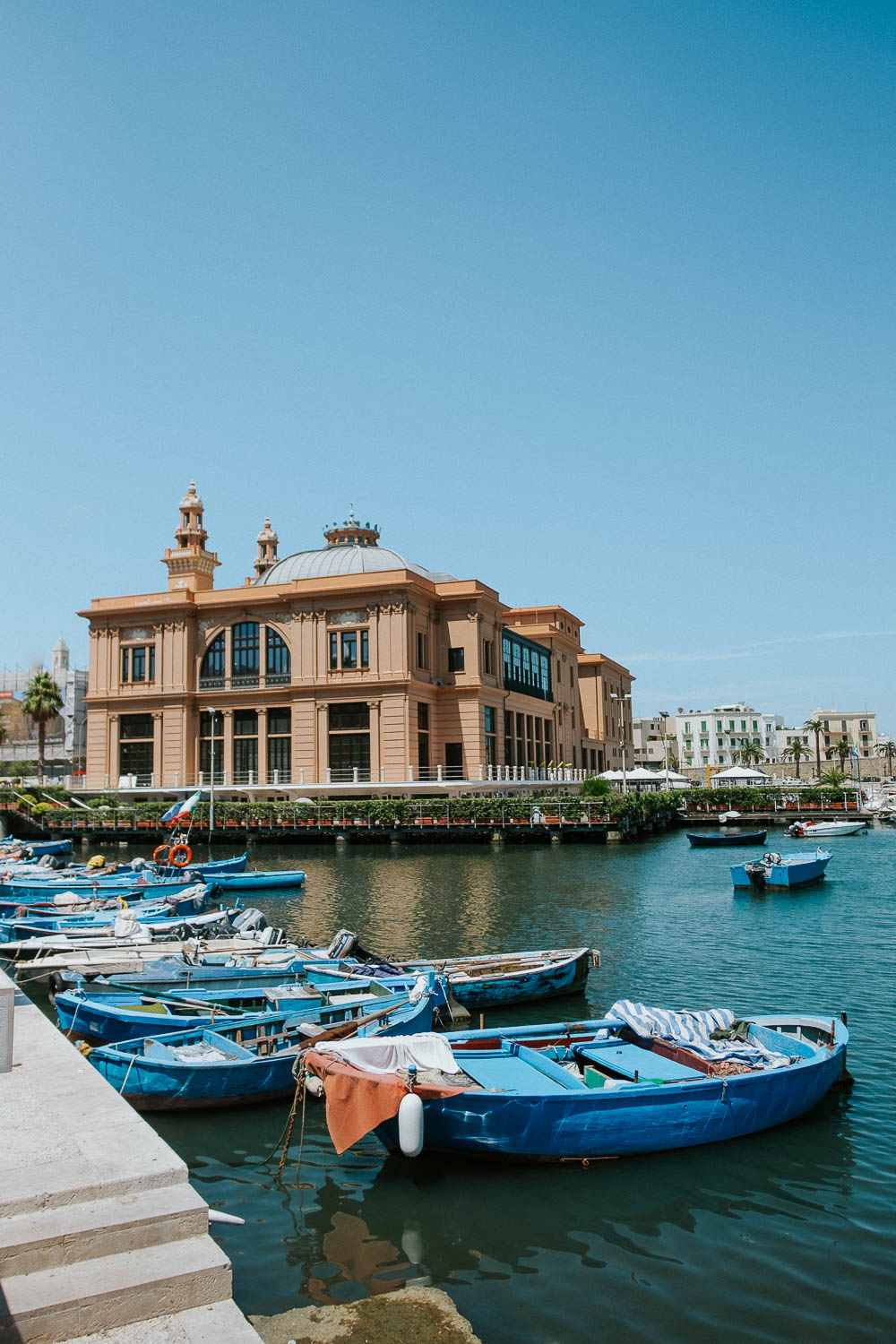 If there’s one thing you have to try in Puglia, it’s ice cream. 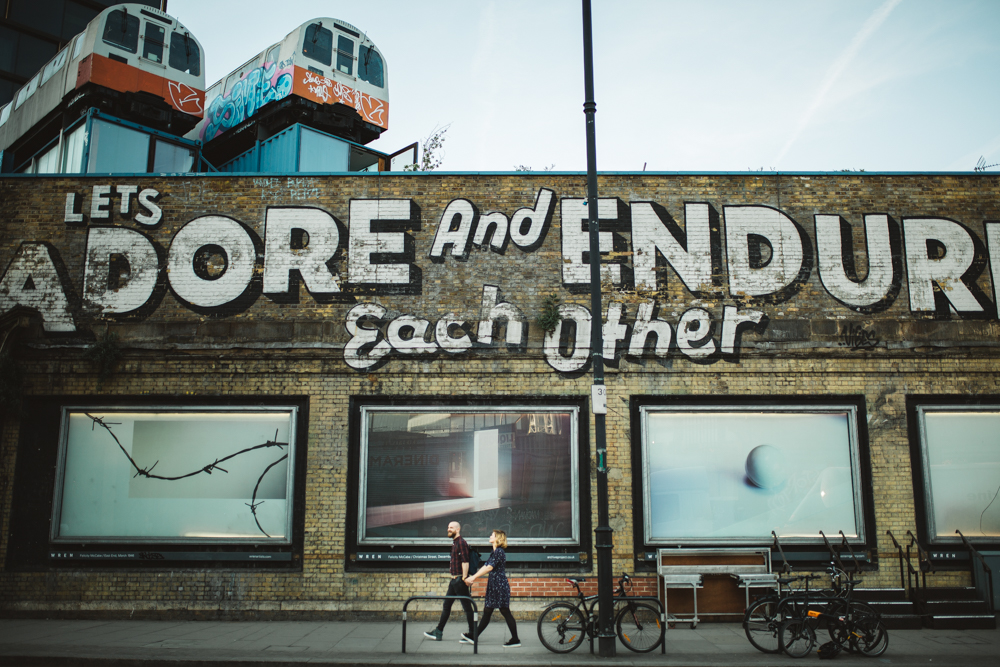