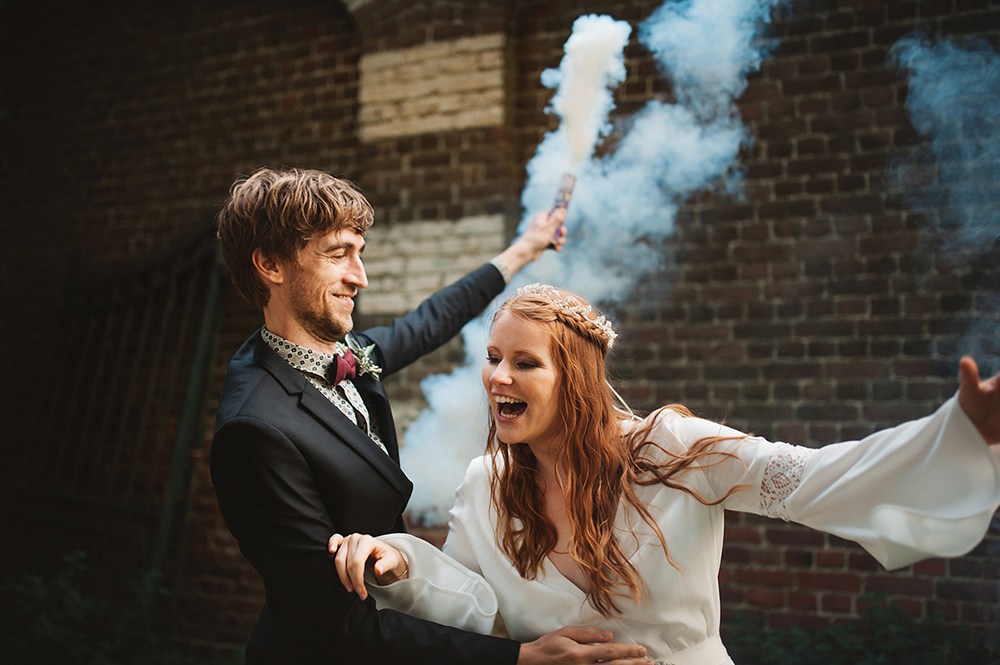 There are people who touch you and with whom you are on the same wavelength, both in taste and personality, and Mary and Bat, it is exactly this couple.

When Mary contacted me, she introduced her wedding as a hipster and overcool event, made of bricks, rock, foodtruck, Janis Joplin’s kimono, and I immediately fell in love with it.

I met them via Skype, the connection was immediate. A big crush on these two and I really waited for this wedding all year long !

Mary is a former model, editor in a fooding magazine and blogger (Slice of Fashion Life), she met Bat on a music clip he was shooting with his electro-punk band nine years ago. The image of their couple particularly hypnotized me, she by her look of goddess with flaming hair, him by his British attitude to Liam Gallagher.

Their friends are also tattooed, work in advertising, art, fashion, design, in short, a beautiful cocktail for a wedding that looks like them, both cool and hot !

They chose to celebrate it in Renescure in the North of France, the Zuthove Barns, a brick-and-wood farmhouse setting, decorated with recycled objects, such as amber bottles, and pretty homemade creations and woven macramé made by the bride.

Their wedding was alternative, a sweet mix between the world of skateboarding, of music (they are both musicians), of gypsies 70’s, of the tattoo …

Because the dress of the bride is also very original, a word also about it.

She had it made by Velvetine, a stylist friend, on a kimono model inspired by the psychedelic era and Janis Joplin.

Mary devoted an article on her blog that you will find here : Slice of fashion life – the wedding dress.

She also adorned herself with a beautiful crown inherited from her grandmother, who had already worn it for her own wedding.